Removal of Boiler and Mineral Scale

Problems and Disturbances caused by Boiler and Mineral Scale:

The following chart shows the energy loss caused by limescale and other mineral deposits: 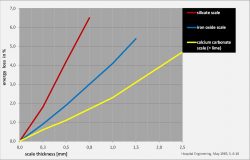 Additionally thick mineral layers lead to thermal strains, because the thermal expansion coefficient of the mineral layer is much less than that of the subjacent metallic material – thus cracks can arise (especially in sectional and steam boilers), which result in expensive repairing.

The (dis)solution of the problem:

Acids armed with special corrosion inhibitors are used to remove calcium deposits. These anti-corrosive agents have been developed to protect metals against acidic attacks – an invisible (mono-molecular) protective film abates on the metal, not affecting the scale, so that the acid is free to remove the deposits.

The kind of descaling agent to be applied depends on metals existing in the system and composition of the scale. We offer perfectly balanced multifunctional products consisting of the appropriate acid and corresponding anti-corrosive agents, enabling our clients to start with descaling of teir system immediately.

Since carbonic acid is generated when carrying out the liquidation of the limescale, which then may lead to foaming of the mixture, a possibility for elusion of these gases has to be set up.

Transformation of the stone layer needs a certain minimum reaction time, hence a circulation of the dissolving agent is required. By this recirculation via an open surge tank the evolving gases can escape.

A chemical stone removal can be carried out either by our service technicians or by our clients themselves.In both cases we suggest to send a sample of the stone layer (about 500 g) to our laboartory to do a preliminary examination.

A pump (BOY Decalcification Pump) which is especially designed for chemical rehabilitation can be bought as well as hired with us.

After decalcification / stone removal the purified system should be re-treated, to prevent short-term corrosion – which is done with our TRINEUTRAL.

Disposal of the used cleaning agent after chemical rehabilitation:

The used cleaning solution has to be neutralized prior to disposal. See more in our leaflet „Neutralization of waste water after chemical rehgabilitation“.

Our important, consistently applied dissolvers for stone layers of various compositions are: